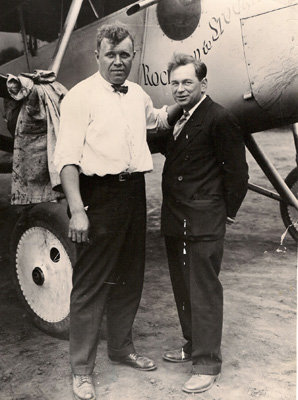 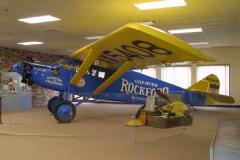 Rockford has had a long-standing connection to aviation from early 20th century aviators to aerospace manufacturers today.

Glide through our Aviation Gallery to learn about Rockford’s pioneer aviators including Col. Bert Hassell (above: pictured right with Parker “Shorty” Cramer on right). In 1928 Hassell attempted to fly his airplane, The Greater Rockford, from Rockford to Stockholm, Sweden by way of a shorter, northern route. Although he ran out of gas in Greenland, Hassell is nonetheless credited with pioneering the “Great Circle Route” between the U.S. and Europe. The plane remained abandoned on a glacier until 1969 when it was brought back to Rockford. It has been on display at Midway Village Museum since the 1980s.

Also featured in the Aviation Gallery is the remarkable story of Rockford’s own Bessica Raiche (pictured below), who was the first accredited woman in America to pilot an airplane solo on September 16, 1910. 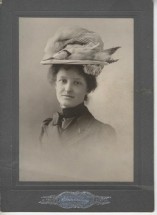